A slow computer doesn’t have to be the case anymore. Solid State Drives, known as SSD are hard drives with no moving parts. What this means for you is that they are very very fast.

The Little Computer That Couldn’t

A few years ago my cousin Gerry bought a little computer that he could use for travel, a HP Pavilion x360 Convertible. This was in addition to his primary home computer and using techniques like cloud storage he could still access everything from this small machine.

After setting up the computer and installing things like Microsoft Office 365 and Dropbox, Gerry found the computer to be extremely slow. It took over 15 minutes for the computer to power on and get logged in and even then everything was sluggish. This was a new computer out of the box and it was painful to use.

Eventually Gerry got fed up with using it and while discussing it, I convinced him to get a cheap Chromebook. While a great solution for many tasks, Gerry still wanted a travel computer that could run Windows. I have had much success with replacing old, slow hard drives with SSD but this computer appeared very challenging to open. So we left it as is.

After about 2 years, we got to discussing this computer again and I decided that I was up for the challenge of opening it up to see if the hard drive could be replaced. There wasn’t much to lose as it was to slow to be of any use. I learned that modern computers are made to be hard to open. To be fair, on very thin computers, it’s quite a challenge for manufacturers to pack in all the parts in a small case.

I searched YouTube for instructions on how to open a computer like this. Several made reference to screws hidden underneath the pads on the bottom (red arrow pointing to them).

I carefully pried these off and sure enough there were screws underneath. After removing all the screws, I gently pulled off the top keyboard and got access to the internals. If you’re wondering what the inside looks like, I’ll save you the suspense – here it is. The hard drive sits in that empty slot in the side so I realized it would be quite easy to replace it.

Inside was a slow, old 500 GB traditional, slow, with moving parts hard drive. There’s much better solutions, such as fast SSD drives so that is exactly what I suggested that Gerry do – get a replacement hard drive.

Gerry ordered a new 1 TB SSD hard drive for $136 (CAD). Prices have really come down. The next part would appear to be the most difficult but was actually very simple – copying from the old to new hard drive. For that I used my hard drive duplicator. It looks kind of like a pop up toaster oven but instead of bread you put in the source and target hard drives. Press one button, and then wait awhile, and voila, your entire hard drive is cloned!

How the patient is doing now

The difference from before with the slow hard drive to the new SSD is like getting past a slow section on the highway and kicking it up to highway speeds! The computer now boots up and is ready to go in less than a minute. Everything is fast and smooth and will be a productive and valuable tool. With a 1 TB drive, Gerry can have a full copy of his Dropbox files on the computer. This means that while travelling and away from internet access, he can still have access to all his files. Gerry is leaving on a trip soon so I’ll have to get a full report when he gets back. There’s no excuse now for vendors to ship computers with slow hard drives. SSD drives have come down in price so every computer has the ability to have a speedy disk. And if you have an older slow computer, or even a new one with a slow hard drive, there is a cost effective solution to make your computer at a much faster rate.

My parents are in the process of downsizing their house to a smaller one. Part of the process is going through years of papers and memorabilia to determine what to keep and what to throw out. That seemingly important file from 20 years ago doesn’t look so critical when you look at it now. The collection of National Geographic Magazines might seem valuable but do you (a) need it and (b) do you have anywhere to put it. With digital data, there are many of the same issues and it’s important to be able to determine what is important for long term vs short term.

An important distinction to be made between physical and digital data is the amount of space it takes to store both. Having to find place for 500 magazines is not quite the same as having a big enough hard drive to store 500 digital copies of the same magazines. Hard drives continue to drop in price so it’s feasible to keep buying larger hard drives as your quantity of data increases. And it’s also like that your current hard drive purchase will be cheaper and higher capacity than the previous one.

This is not an exhaustive list, but it should help you think about what you should and shouldn’t keep.

This summer we went on vacation in Nova Scotia and Prince Edward Island. We took lots of great pictures of the scenery. When we returned from the trip, I went through the hundreds of photos that we took and DELETED many of them. If there are 10 pictures of a statue then only the best one needs to be kept. The key thing here is to do your purging of pictures as soon as possible. If you wait until the end of the year then there’s a good chance you’ll never delete anything. The same goes for videos. Check your videos after you record them and if they’re no good, then get rid of them!

These include all your digital bills and statements, receipts for products purchased and everything to do with taxes. I’m not one to give financial advice but I have been told to keep all tax related documents for 7 years. I have also heard that when there’s a tax problem, the tax department might go back even further. The reality if you save copies of documents then the files are not too big, at least compared to photos and videos. If you don’t do much else in digital filing, at least have a folder with files for years. Put everything in each year’s folder. Take it further by having folders for bills, statements, receipts, taxes, etc. This way if you decide to get rid of certain years, you know that the files are broken up by years. And it has the added bonus of making it much easier to find what you’re looking for.

Some of these documents are related to taxes or finances and should be filed along with the statements. Others are quick letters or notes that you might take that are never needed again. These too should be kept in folders by year so that you can quickly check through them at the end of the year to see what you actually need. Many of these are also small files that over time do not take up that much space on our ever increasing sized hard drives.

What to do with files that are kept?

The key take away here is to have an effective filing system so that you can better locate what you want to keep and what to get rid of. In future posts, we will talk about various methods for long and short term archiving. You should be able to actually find what you choose to keep!

A device with many mechanical parts like a computer is a failure waiting to happen. That shiny new computer you just bought is edging its way to the day that parts start to break one day. Hard drives are rated for MTBF which means mean time between failures – how long until it fails. It’s not just a matter if it will fail but when. We can’t prevent failures from happening but with effective preventative maintenance, we can better handle the outcome of the failure.

All parts of a computer will eventually fail, but some matter more than others. The CPU / main processor or power supply failing means that the computer will stop running but if the hard drive is intact, it can easily be moved to another computer to recover the data. Memory chips failing can cause strange issues where programs crash all the time, but when the memory is replaced then the computer runs as good as new.  The problem is when the hard drive fails you may or may not be able to recover data. Some data recovery companies can get back your data but this could cost thousands of dollars.

The first step in preventative maintenance when it comes to hard drives is running some type of diagnostic tool. A free one that I have used for several years is Crystal Disk Info. All modern hard drives have built in sensors that are able to report to software if the hard drive is showing signs of failure. A program like Crystal Disk Info will show you visually about your hard drive health. It looks like this: 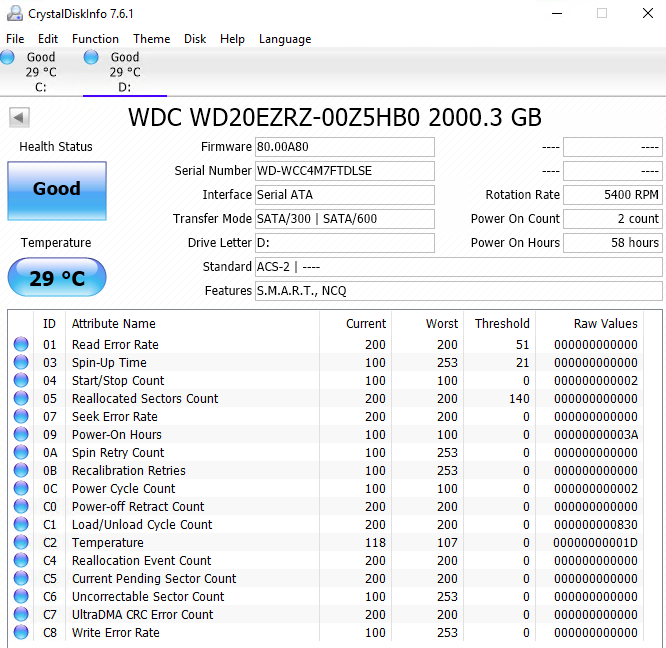 A few notes about how to read the above information:

Crystal Disk Info can be configured to pop up an alert when it senses a problem. This is a very good option to have enabled so that you can take action when this occurs.

If you do one thing today to prevent future data loss, install Crystal Disk Info! If you have a Mac, look for S.M.A.R.T hard drive diagnostics for Mac.

I listened to an episode of one of my favourite podcasts, Freakonomics, recently. This one was entitled In Praise of Maintenance. The idea here is that as a society, we always want to build and create new things but we neglect the maintenance of the structures and creations that we already have. Governments talk about building new highways and public transit, but it’s not so exciting to provide funding to fix existing roads or subway tracks. The same can be said be said for our own digital life. 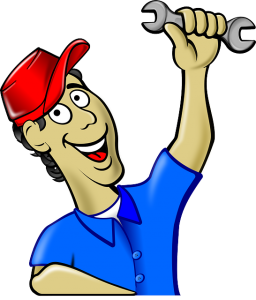 Computer and smartphone manufacturers market to us constantly to upgrade to the latest and greatest devices. High resolution screens, fast processors and huge hard drives are very enticing as compared to our ‘old’ two year old computers! If we aren’t taking proper care of our data, then buying new doesn’t solve the existing problems that effective maintenance would alleviate.

In previous posts, I’ve talked a lot about being mindful of where your data resides and ensuring that it’s backed up. With regular maintenance of our data, we can have our cake and eat it too:

So what kind of maintenance should we regularly be doing? Here’s a few suggestions:

There’s many more that could apply. What types of maintenance do you need to do with your digital data?

Leave your comments here or fill out our survey / backup assessment.