We recently returned from a fabulous week touring in Nova Scotia and Prince Edward Island. Along the way I took many pictures and videos of the beautiful sites to be found along the way. Without getting into a whole travel review, I will say that if you haven’t driven the Cabot  Trail, go and see it!

When I arrived home, I had a folder with numerous pictures and videos that were combined from mine and our friend’s camera. I was doing various manipulations and then at some point I somehow managed to delete the entire folder of pictures and videos!

Even though this happened, I took a deep breath and then copied back the files from my Network Attached Storage (NAS). I talked about NAS in a previous post. Backup and data protection isn’t only about protecting for loss in the future when something fails. It also applies, maybe even more frequently to protect us from our own mistakes!

When you are transferring photos from either your phone or digital camera, following these steps will ensure that you prevent a future loss of your data:

When it comes to human errors in computers, it’s not a case of if it will happen but when. By taking preventative measures with your most important files, you can ensure that you don’t delete your vacation pictures before you’ve had a chance to properly protect them.

With the tools available today for backing up and syncing data, there is no reason for data to be lost when something bad happens to your computer. A recent story about a friend of mine illustrates this well.

This friend is a lawyer who works from a home office. While spending a few months in Florida, his laptop crashed and required a complete reinstall, wiping out all of his data.

A few years ago, I talked to him about setting up a system where all of his data is safely and securely protected. This involved a few things:

All of his current folders with important client data were moved into Dropbox. Dropbox offers a free 2 GB plan but his data was larger than that so he opted for the 1 TB plan at a cost of $129 Canadian ($100 US) per year. The added benefit of using Dropbox is that it syncs automatically between computers so he can seamlessly move between desktop and laptop as needed. Dropbox also has an app for the iPhone / iPad so he can view his documents on these devices when out or when visiting with a client.

Over the last year my lawyer friend also moved his email from one that downloads all email into Microsoft Outlook on his computer to Microsoft’s Outlook.com cloud based email service. Since he also subscribes to Office 365, which is Microsoft Office paid for yearly, he gets an enhanced Outlook.com experience with no ads and additional storage space. It also means that all messages are stored in the cloud, but can also be accessed through Microsoft Outlook on a computer (see previous series about moving email to the cloud)

If you are familiar with Office 365, you’ll know that one of the benefits is 1 TB of space in OneDrive, Microsoft’s answer to Dropbox. You then might ask, why would I tell me friend to pay for both Office 365 and Dropbox? At this time, there is one very important feature that is not available in OneDrive – easy restoration of folders. Let’s say that a ransomware virus goes through your computer and infects your Dropbox files. All of them are wiped out or overwritten with garbage. Dropbox has mechanisms in place to allow the mass restore of a deleted or changed folder. OneDrive forces you to restore file by file. This is fie if you have 10 or even 50 files, but imaging if 5000 files needed to be restored? Until OneDrive updates this feature, my recommendation is to pay for Dropbox or a similar service that offers these recovery options.

In addition to Dropbox, my lawyer friend also uses CrashPlan for business to back up all of his important files, including personal pictures and videos. This extra layer of protection ensures that all of his critical data is protected. The next piece that I will recommend to him is to add an external hard drive to his computer at home that also backups up the above mentioned files. In the case of a restore requirement, it is always faster to restore from a local hard drive instead of from a cloud based service. The cloud service becomes a secondary insurance policy.

The moral of the story here is to always have numerous levels of backup. Computers have become so inexpensive that they can be seen as appliances that are replaced when they wear out. As long as your data is safely protected and backed up, you can quickly get back up and running when disaster strikes.

You’ve spent several months researching the latest in technology and you buy a brand new top-of-the line laptop. You move over all of your important documents, family pictures, and videos. Everything is working great and you’re loving how fast the new computer is. One morning you start up your new computer and there’s a dreaded message that your hard drive is not installed and your computer doesn’t start.

This isn’t fiction – it actually happened recently to my cousin. 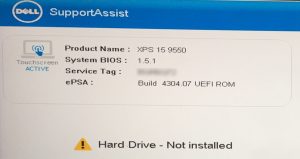 No problem you say, since you’ve got all your data backed up you can just get the computer fixed and put back all of your important files.

What’s that you say? You didn’t back it up? You’d better hope that whoever fixes the computer can retrieve all of your files!

Even though buying a new computer usually means that you’re getting something that is secure and reliable, there are no guarantees. The first thing to be done once the computer is up and running is to set up a backup routine.  In future posts, we will discuss the process of deciding how to back up and getting it done.

One easy method for dealing with a failure with a new computer is to leave all of your files on your old computer for a period of time. In the case of my cousin, even though this happened 1 month after he started using his new computer, all of the files were still on his old one and were easily retrieved.

That’s great you say, but what about the important files like finances and other documents that change every day? For those types of files, all of these remained safe as all of them were located in a cloud based service, such as Dropbox. Getting your frequently updated files into a cloud based service is a good first step to protecting all of your files.

Maybe you prefer a good, old fashioned paper calendar over having one on your phone. People ask me all the time if I think they should switch to a digital calendar. My answer is always the same – use the tools that make the most sense to you. Sometimes a hybrid approach works. Last year my son Benji, who was in grade 9 at the time, was given a suggestion to buy on of those large monthly calendars so he could plan out a month at a time, something like this:

This was the perfect complement to his Google calendar, which he shares with us (more about that in a future post). Every month he plans out his school projects, other appointments, and plans with friends. Is there duplication? Yes, but this overall written view coupled with his Google calendar helps him remember where he has to be and what he has to do.

Wednesday nights are busy ones at our house. Benji goes to an activity at a mall nearby and buys dinner at the food court so that he can eat before being taken to another activity. While waiting for his food, he put down his calendar and forgot about it. When we checked with the mall the next day, there was no sign of the calendar.

Since this calendar is more of a supplement to his main digital one, the information located on the paper calendar can easily be recreated.  But this got me thinking about how we can apply digital data protection strategies to non digital items like paper calendars. One could take a picture of the calendar on a regular basis so that there is another copy of the information.

What this really showed is how our existing paper based products, such as calendars, notebooks and address books need to be kept safe (such as not forgetting them in a mall!) In this case, the large monthly calendar was an added benefit and doesn’t replace the digital version.

There is room for both digital and paper based product and different ways to protect both. What is your method for storing your calendar and contacts? How do you keep them protected?